Rough and Ready Volunteer Fire Department
Town History
History of Rough and Ready (short version)
The Great Republic of Rough and Ready has a colorful history which the residents are proud of.
The first established settlement was made in the fall of 1849 by a mining company from Wisconsin led by Captain A.A. Townsend. Captain Townsend had once served under “Old Rough and Ready” Zachary Taylor, commander of the American Forces in the Mexican War. Through his dedication to “Old Rough and Ready” Taylor, Townsend called his company the Rough and Ready Company, from which the town derived its name. Zachary Taylor was President of the United States at the time this company was formed.
The company crossed the mountains by the Truckee route and set up camp on Deer Creek near the mouth of Slate Creek on September 9, 1849. They mined the bed of the creek with a measure of success and lived off the plentiful game. While foraging, one of the company members stopped for a drink in a stream below Randolph Flat and discovered a piece of gold exposed on bed rock. The company prospected the area and attempted to keep the success a secret. The settlement was named Rough and Ready, and quickly grew to over 3,000 resident miners.
By 1867, the Rough and Ready Township comprised all that portion of the county lying west of Nevada City and Grass Valley Townships, having the South Yuba River as the northerly boundary, Bear River on the southern side, and the Yuba County line on the west. This measured about 16 miles east to west and somewhere around 20 miles north and south, and contained about 200 square miles of land.
At an election in 1850, over 1,000 votes were cast, and the town boasted of over 40 buildings. In 1851, the town was twice the size of Grass Valley or Nevada City. At one point in time, the population reached “6,000 souls”.
Secession from the Union
Soon after its establishment, the town of Rough and Ready was beginning to feel the effects of growing up. There are two stories about how the town decided to secede from the Union. No one knows which one, if not both, are the most accurate. Both are found in history writings.
The first one is about the government imposing a Mining Tax on all claims. This made the local miners furious. The town was also noticing the lack of law and order among its inhabitants. Something had to be done.
The second version and the one that is celebrated each year during Secession Days Celebration (last Sunday in June) has to do with a slicker from Boston Ravine who took advantage of a miner named Joe Swiegart. The slicker was to purchase Joe’s claim for an exorbitant amount if he could prospect more than $200.00 worth of gold in a day. If he could not mine that much, the deal was off and the Boston Ravine slicker could keep the gold he collected for his efforts. This was a known good claim, the bet was taken and judges appointed. As the slicker got close to mining the $200.00, the scoundrel slowed down more and more, eventually he stopped mining, saying that he did not say he had to work the whole day. He was going to take the mined gold and leave, when several miners put a stop to that and were going to lynch up the scoundrel. Noting that it was against the law to lynch anyone, the residents decided to take matters into their own hands and do it “Rough and Ready” style.
On April 7, 1850, a mass meeting of the town folk was called by Colonel E.F. Brundage. An outgrowth of this meeting was the proposal that its inhabitants secede from the Union. It was decided and a free and independent state was organized. The town was now known as “The Great Republic of Rough and Ready”. Rough and Ready shook its fists at the U.S. government with all its taxes and no law and order. At this time the town boasted a population of 3,000.
It did not take long for the scoundrel to realize that he better get out of town fast and never return.
In the heat of the rebellion, they elected Colonel Brundage as President and signed a Constitution similar to that of the United States.
The new republic did not last long. As July 4th came around, the miners were getting ready to celebrate when it was noted that the town was no longer part of the United States. Merchants in “Grassy Valley” (now Grass Valley) and “Nevada” (now Nevada City) would not sell liquor and firecrackers to the “trouble makers” in Rough and Ready. Since miners loved to celebrate, they decided to rejoin the Union and the whole episode slipped into history.
Rough and Ready Today
Famed throughout the United States for its unique name as well as its history, the historic town of Rough and Ready is commemorated by the State of California Marker Number 294. It has an approximate population of 2,500. The community is protected by a Volunteer Fire Department, has its own Post Office and Chamber of Commerce, one of the oldest in the country. Rough and Ready is a growing community.
Rough and Ready’s summer temperature average is in the 80’s and a winter average in the 40’s. The average rainfall is about 52.33 inches. It has an average altitude of 1,885 feet above sea level. It is mostly above the fog and below the snow. Altogether, it is an exhilarating place to live.
Upcoming Events
Every Wednesday
7:00pm - 10:00pm
Fire Training
Every 2nd Tuesday
7:30pm
Board of Directors Meeting
Every 2nd Friday
6:00pm - 8:00am
4-H Meeting
Burn Day Information

What District Do You Live In?

GET YOUR BURN PERMIT AT OUR FIRE STATION DURING BUSINESS HOURS

Promote Your Page Too

Do you know what Fire District you live in? 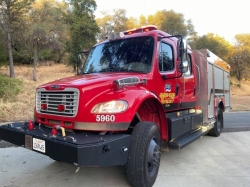 Copyright © 2006-2021. YourFirstDue Inc. All Rights Reserved. Designated trademarks and brands are the property of their respective owners. Content on this web site is supplied by Rough and Ready Volunteer Fire Department. YourFirstDue Inc. cannot be held responsible or liable for any content, text, pictures, or any other media found on this web site. Maintained by the members and staff of Rough and Ready Volunteer Fire Department.
Management Login
Powered by